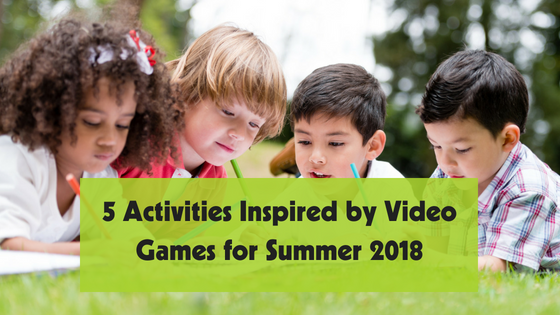 Looking for activities for kids during Summer 2018? Trying to come up with some fun birthday games and not sure what kind of activities to plan? Whether your an adult or a toddler, here are 5 activities inspired by videos games for Summer 2018 that will bring loads of joy and excitement.

Having a birthday party for large groups and a fan of Super Mario? Then recreating Water World in your backyard would be an awesome way to kick off the summer. Kids can let out their energy that has been bottled up for the entire school year by avoiding the chomping flowers, jumping the pipes, and stomping the Goombas. These creative obstacle courses are a great way to have a fun-filled birthday party and make excellent activities for the rest of the summer! Watch as your kids power through these obstacles courses and show-off their Super Mario skills!

Looking to have a more active game that involves strategy? How about a game that showcases your slingshot skills and your hatred of the green pigs? Then this activity is a must! All you need to turn this video game into a backyard extravaganza is some medium size pillows, cardboard, and a homemade slingshot. This activity is perfect for large groups as they can team up and challenge one another. This is surely an unforgettable experience and will have all your guests excited and eager to participate.

Want to unleash your kid’s inner superhero fantasy and showcase their superhero abilities? Then making a superhero cape for them is the ultimate activity for kids to do this summer! Constructing their favorite superhero’s cape will take some time but acts as a fun indoor resting period for the kids and adults. After their done, they can test out their newly gained superpowers with relay races outside!

For an alternative activity that involves some arts and crafts time, making Minecraft wall art is a great activity for kids to do for Summer 2018. Assembling a collective piece of wall art will allow your kids to create different art pieces inspired by their favorite Minecraft scenes and work together to assemble them in one piece. This activity is a great way to involve constructive learning activities into your child’s Summer curriculum.

This activity is a hands-on experience that your kids will love to do for the summer. Being able to build their gliders and seeing it fly around the yard will light up your child’s eyes. This fun activity will teach them how to construct a 3D model from scratch and will allow them to use their imagination to design it the way they want it. When the kids are done, they can show their pride in their gliders while they fly to the finish line outside.

Book Us For Your Summer Activities!

If you’re looking for fun activities for kids during Summer 2018, GameTruck San Jose is there to help you with great ways to entertain your kids for a fun-filled summer party. With a variety of games and consoles, GameTruck San Jose is an asset to parents looking for a fun way to entertain kids without all of the mess. Visit our website to book us for your next party! 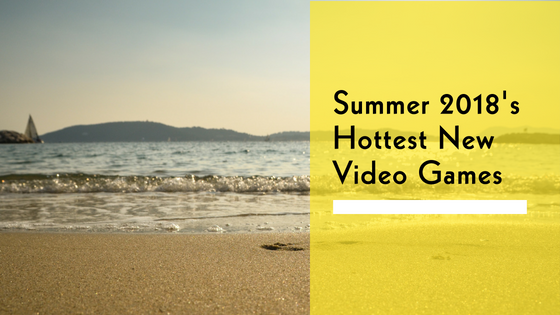 As the summer months approach and the school year ends, the time for video games is now. Summer 2018 will bring loads of time to catch upon your favorite video games and explore new games! Here at GameTruck Jacksonville, we’ve compiled a list of Summer 2018’s hottest new video games to play with friends and family.

Arguably the hottest game to be playing right now and into the summer is Fortnite Battle Royale. A free-to-play multiplayer online game, it has taken gaming culture by storm. Players can play alone or work in teams to work together to survive until the last player standing. Players can also take down and build elements as they see fit to help them along. No summer video gaming experience would be complete without it.

Like Fortnite, PlayerUnknown’s Battlegrounds is also a massively popular online multiplayer battle royale game. While not the first battle royale game to be released, it quickly changed and impacted online multiplayer gaming. Players are dropped onto an island that slowly shrinks over time and must find weapons and armor with which to survive. Everything and anything is possible, and creativity goes a long way. With games able to support up to 100 players at a time, players can join up in groups and work together or play solo.

While Dragonball Z has remained popular in the fighting game genre, Dragon Ball FighterZ takes the Dragonball franchise to a whole level never before seen. The game takes place at the time of the new show, Dragon Ball Super. There is a base of 24 playable characters with more to be released in the future. Teams of 3 characters are created for players to fight it out to win. All the strengths, moves, and special abilities popularized by the TV show are now in the hands of the player. Players can play in a solo campaign story mode or online multiplayer mode.

After years of anticipation, Monster Hunter: World is the newest and best in the Monster Hunter series. The game is an open-world action role-playing game where players take on quests and missions to hunt down and capture or kill monsters that threaten the world. Players also build items, weapons, and armor from items looted from captured or killed monsters. This aspect can change entire outcomes and battles and affects gaming style, abilities, and combat moves.

Sea of Thieves is a recent release from developer Rare, creators of the now legendary Goldeneye 007. Sea of Thieves is a pirate-themed action-adventure game where players will take on the roles of being a pirate on the high seas. The game is an open-world environment where players will take on missions to find treasures, fight other players, and explore the world. The game can be played in solo, co-operative multiplayer, or player-versus-player. More content and extras are planned to be released soon, which will alter levels and add new ones!

Play these games and more this summer with us!

Summer just isn’t summer without video games and friends! Plan your next Fortnite gaming party with us at GameTruck Jacksonville – with consoles including XBox One, PlayStation 4, Wii-U, and Nintendo Switch on HD Flat Panel TVs. Call us today at (866) 253-3191 or visit our website to plan and book your next video game party. 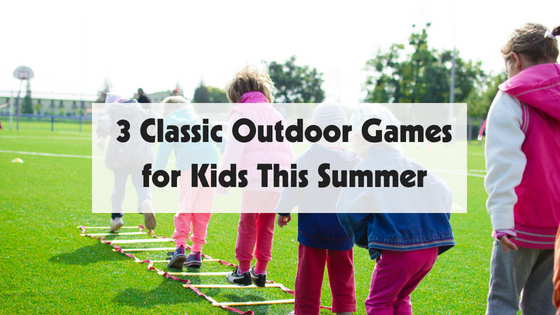 Summer is the ideal season for kids to get outside, get active and have fun. It is, no doubt, a difficult task to get your kids excited to go outside with so many other indoor options. Peeling your kids away from their favorite video game can be difficult, but not impossible with the right outdoor games! Simple, engaging and safe, these parent-approved and kid-friendly games are the ultimate summer solution. The team at Game Truck Atlanta has found three summer games that are perfect for your kids to play all summer long.

Running – even if it’s away from trouble – is something all kids love to do. Freeze tag is a classic summer game for kids of all ages. Depending upon group size, one or two kids are the “taggers”, and the rest of the group’s mission is not to get tagged. In a safe and enclosed area the kids will run around, and if they are tagged, they must freeze in place. These kids can only unfreeze if another player tags them. The last one or two kids tagged are “it” in the following game. This game is great for hours and hours worth of fun.

To play this game, the only equipment needed is a ball and a large space. With one child in the middle, the other kids must stand around in a circle nearby. The thrower will then throw the ball in the air, and when caught they’ll call out “SPUD”. The other players must stop where they are. The thrower will then try to tag another player with the ball, and if they hit them, the hit player will receive an “S” and is now the next thrower. You can veer away from the ball but cannot move your feet. If the original thrower misses they receive an “S”. When you’ve been hit or miss a throw, you will continue to gain letters, and once you have all four letters, you are out. The last person remaining will be deemed the champion.

Four square is quick, engaging and only requires four or more players. Only four players can play this game at a time; four square is a simple game using only chalk, a ball and a flat surface. First, you must draw a square and split it into four equal squares and label them one to four clockwise. One is King, two is Queen, three is Jack, and four is Ace. The king takes the ball and bounces it into another square and that player must bounce it into another square allowing the ball to hit their square only once. If the ball bounces twice or they miss it, they are out, and the square rotates. The person who stays in the king spot the longest is the overall winner.

Outdoor games this summer are essential for a healthy and active lifestyle for any kid. Getting a group of friends together can be fun and easy with the team at GameTruck Atlanta. Adding GameTruck to your next summertime party gives you the flexibility of having both outdoor games and convenient video game sessions at your disposal. Check out our website here or call us at (866) 253-3191.