Blog » Jacksonville » Secretly Educational Games to Play with Your Kids 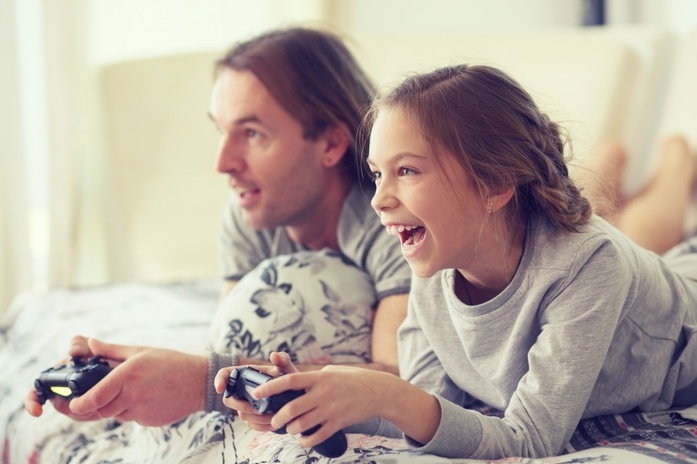 Despite what society might believe, video games aren’t a mindless activity. Most games are extremely cerebral, requiring mental acrobatics to achieve certain goals in a creative way.

Ever since the game’s industry’s early days, game developers that try to create “edutainment,” mixing kid’s entertainment with educational materials. Unfortunately, these attempts ultimately failed to keep the player’s interest, due to poor understanding of what makes a game fun to play. An educational game can’t teach a lesson if it’s off.

This month, we’ve created a list of fun games that are secretly educational. They’ll love playing them — and might even learn a thing or two.

Scribblenauts is a series of “puzzle/action” games for the Nintendo DS and mobile devices. Players must use logic and problem-solving to guide the protagonist, Maxwell, through the game’s intricate series of quests. The player scribbles the name of an item on the DS’s touch screen and can use that object to solve the riddle.

Unlike linear puzzle games, Scribblenauts recognizes multiple solutions, allowing players to approach each problem from a unique angle and still hope to succeed.

Civilization is a long-running strategy game series, created by Sid Meier. Each game gives the player a chance to rewrite history and make decisions that will change the foundation of their society. Gamers take control of a fledgling nation and learn about finances, strategy, and resource management as they steer it towards prosperity.

Civilization requires the player to look at the big picture, focusing on the macromanagement of their nation, with early game decisions leading to potentially massive consequences as the society ages. Players must balance the needs of their society with winning the game.

Recently, Sid Meier confined that a special edition of Civilization, CivilizationEDU, would be available for school use.

The Professor Layton series revolves around the titular professor and his young apprentice as they roam the game world, searching for mysteries to solve. The player must collect clues and complete riddles to help the duo in their quest. With over 150 puzzles of increasing difficulty, Professor Layton gives a great mental workout.

The game’s storyline is entertaining, stimulating, and holds the player’s attention while teaching math, logic, and problem-solving skills. The third game in the series won a Parent’s Choice Silver Honors award in 2011.

The Portal series is a first-person puzzle game that tasks the player with manipulating physics to complete tests and defeat a malicious Artificial Intelligence known as GLaDOS. The player finds a Portal Gun, a device that opens one entrance and one exit portal at a time. Think laser tag, but with a gun that opens wormholes through space. The goal is to use these portals to make it through an increasingly complex obstacle course, before confronting GLaDOS at the center of the facility. .

Both Portal and its sequel are great tools for teaching physics, spatial movement, and creative thinking. While the game hints at a dark backstory, the actual gameplay and dialogue are exceedingly clean and witty.

The obvious inclusion on this list, Minecraft is already used in some schools (Mojang, the developers, even offers an Education Edition of the game with extras for classroom collaboration).

Minecraft is essentially the digital equivalent of handing your child an endless Lego set and telling them to go wild. They can build anything that they imagine, as long as they have the right components. The game teaches geometry, physics, and resource management all wrapped up in a blocky package. The possibilities of the game world are virtually limitless. Players have created everything from gigantic replicas of statues to fully playable video games inside the game.

Social interaction is just as important for your child’s development, so gather a group of friends, and let them cut loose with a GameTruck party. We specialize in no-hassle party experiences that your guests will be talking about for weeks. For more information or to receive a quote, give us a call at 904-800-0880!