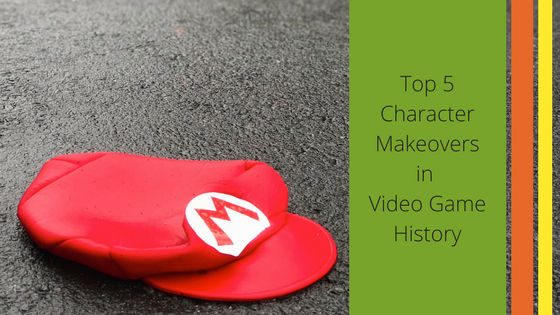 If you love playing video games, you likely have a favorite character. Whether a character is iconic or newly introduced, they’ve likely undergone some changes. Here are our top five character makeovers in video game history.

When Lara Croft first debuted in Tomb Raider in 1996, the character looked nothing like the adventurer we know and love now. The original character had unrealistic proportions and looked more cartoony than human, while the current Lara is ridiculously lifelike.

Mario was introduced in 1985, and the character lacked definition because it debuted as an 8-bit character. You can’t fault the designers for not trying —the technology simply wasn’t there. Today, Mario is known for his red-and-blue getup and unforgettable mustache.

When Link was introduced in The Legend Of Zelda, the character was playful and young looking, and he didn’t look much like today’s Link. While the outfit remained the same, the hero became more intense and intimidating.

For more than 30 years, fans have loved Princess Zelda –– and she’s changed in major ways over the years. In the beginning, Zelda looks young and cartoony. Our current Zelda is a total warrior princess and looks much older.

Compared to our other character makeovers, Pikachu is much more subtle in its evolution. The original Pikachu was rounder and had slightly more detail than current versions. It makes sense that Nintendo has been hesitant to make any drastic changes to such a beloved character –– Pikachu’s yellow, slightly cuddly appearance is one of the most recognizable characters in the industry.

If you want to play games featuring your favorite characters, book an event with GameTruck Inland Empire. Whether you’re in Inland Empire or a surrounding city, we’ll come to you and make sure your party is unforgettable. Give us a call at 866-253-3191 or click here for a pricing quote.