Blog » Inland Empire » 5 of the Most Patriotic Video Game Characters 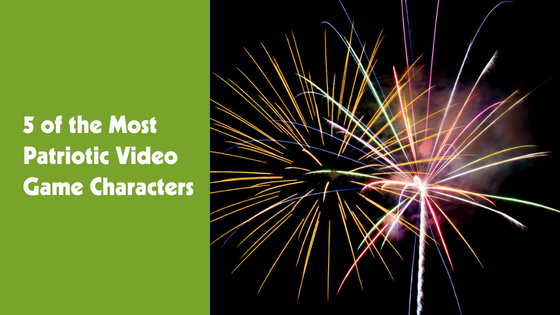 As summer comes into full swing and festivals open up, we approach the most revered summer holiday in America – Independence Day. On the 4th of July, we come together to celebrate everything that makes The United States of America a great and mighty nation. This patriotic feeling is not only shared amongst our citizens but also is an integral part of our culture from movies and books to video games. Gamers: get ready to begin your gaming this summer with the most patriotic video game characters!

What can be said to be the most well-known icon of American patriotism? Captain America has been around fighting for freedom and against tyranny for over 77 years. With the last decade of Marvel movies, he has only grown more popular and well known to an entirely new generation of kids. Leading the cause of the red, white, and blue against the foes of freedom, he makes any patriot on the 4th of July proud. Captain America embodies every image of American patriotism that we’ve come to know and respect.

The wild west gunslinger is a prominent fixture of American symbols. Few other video game characters fit the role like McCree from Overwatch. Decked out in a cowboy hat, poncho, boots, his peacekeeper revolver, and his gruff voice, he’s the model American cowboy we’ve all come to know and admire. With his signature revolver, he backs up his allies in fights and takes down those who oppose his cause. Now on the path of retribution for his past, he seeks to make amends and find the righteous cause of any true patriot.

As a staple of fighting video games for almost 30 years, Guile from Street Fighter was the game’s answer to the American patriot. Sporting an American flag tattoo on his bicep, Guile, a Major in the United States Air Force, enters the World Warrior tournament to avenge the death of his friend Charlie.

Another well-known and long-lived patriotic character in fighting video games, Major Jackson Briggs, or Jax from Mortal Kombat is everything you’d expect from an American patriot. He’s first introduced in the Mortal Kombat series working for Special Forces looking for his partner, Sonya Blade, who was after Kano. After succeeding, he then stays on to defeat and save the Earth from the evil villain Shao Kahn. Typically seen wearing the American flag, he loves his country and fights for its ideals and freedom.

Without argument, the most patriotic video game character would have to go to Liberty Prime from Fallout 3 and 4. Initially designed before the events of the game, Liberty Prime is a 40-foot robot meant to combat Communists with impunity. Built with weapons such as mounted laser cannons and what seems to be an inexhaustible supply of miniature nukes, Liberty Prime is a force not to be taken lightly. Liberty Prime makes sure you know it too with such lines blasted out such as “Democracy is the essence of good. Communism, the very definition of evil.” and “I am Liberty Prime. I am… America.”While Liberty Prime may not know the true essence of patriotism, the robot personifies a heavy-handed idealistic form of patriotism.

Make your summer even better with us!

With the kids out of school, planning ways to keep them entertained and happy doesn’t have to be difficult. Game Truck Inland Empire is here to help and make the summer an even more entertaining experience. Whether you’re bringing the kids together with video games or outdoor laser tag, planning your child’s next birthday party or event is made simple. Call us today at (866) 253-3191 or visit our website to plan your next party.