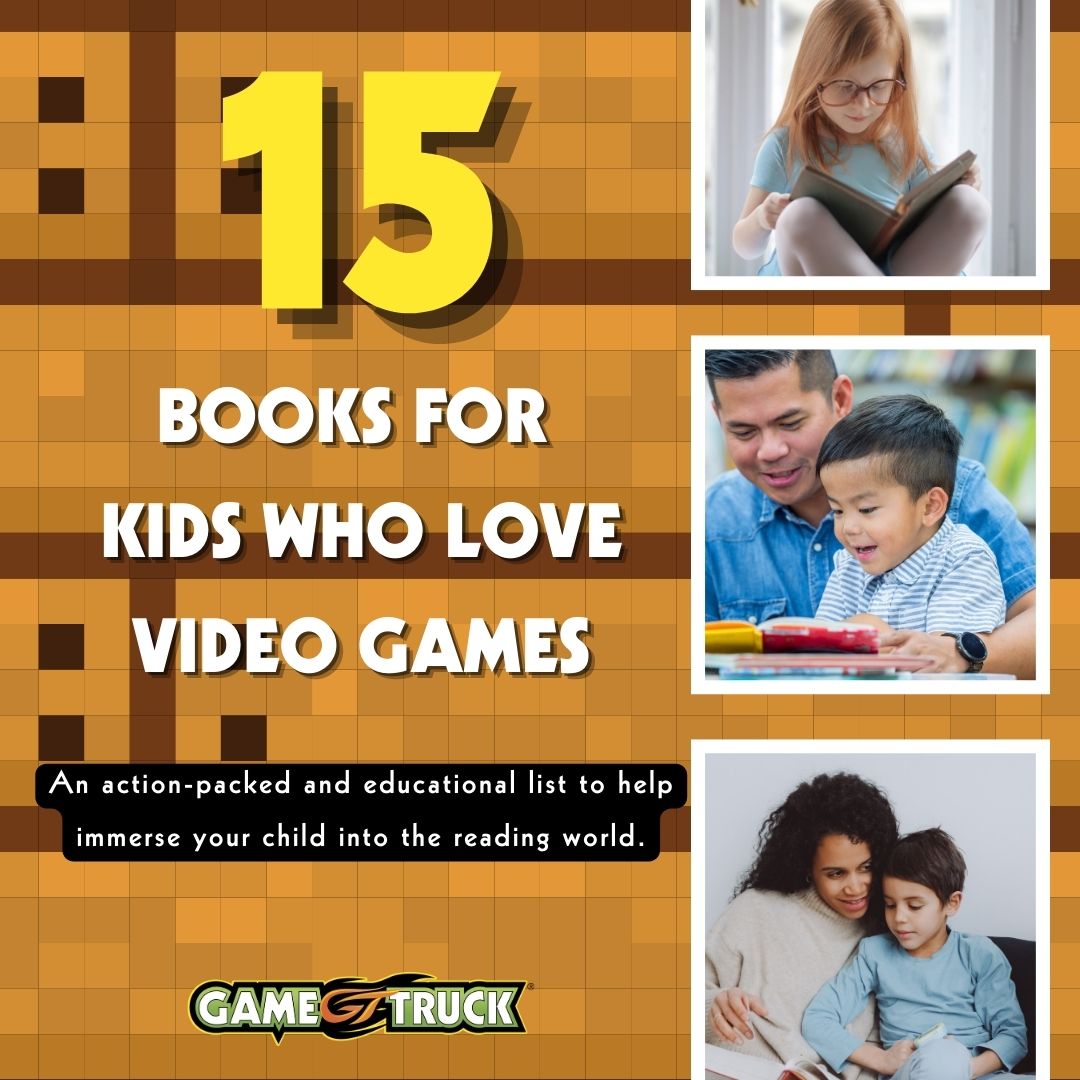 Which is better: video games or books? The conversation presented to parents often pits these two hobbies against each other. They’re in an epic battle, dueling for your child’s attention, but that couldn’t be further from the truth. You want to see your kid succeed and have a wonderful childhood. You don’t have to pick between the two. You can have both for your family. The secret is to make learning fun.

Now, most kids will only do additional homework mandated by their teacher, but as parents, we can make learning fun! You know your kid best. You know what they’re passionate about. You’ve spent hours trapped inside a Minecraft conversation, struggling to understand what’s even going on. In a desperate attempt for five minutes of silence, you hand over the video game controller only to wrestle with mom guilt later for not handing them a book.

Ditch that mom guilt! GameTruck has your back. Maybe you have an avid reader looking for a fun, new genre. Perhaps you have a kiddo struggling to engage with reading as books are “boring.” No matter which group you find yourself in, we’ve got a list of action-packed and educational books to hold you over till your next GameTruck party. Utilize this list to help immerse your child into the reading world.

Summary: Minecraft-inspired YouTube star PopularMMOs brings everyone’s favorite characters to life in a thrilling adventure to save their friend, battle the undead, and escape the hole new world they’ve crashed into with one unfortunate misstep. Read more here.

Summary: A little girl must use her coding skills to save her video-game home in this adorable debut picture book. Ava thinks living in a video game is pretty cool. She and her cat, Pixels, spend their days riding breakfast rollercoasters and heading to underwater discos. And if something isn’t exactly perfect, Ava can reprogram the world to be just the way she likes it. But then the game’s villain, Max Hacksalot, comes along on his magical pirate unicorn and breaks all of Ava’s code. Read more here.

Summary: Izzy has an incredible secret – she can enter the world of her new video game! She meets Rae, a robot who says Izzy is destined to save Dungeon City from the Big Boss. How is this possible?! And how can she fight for this virtual world when she’s got a whole real life to keep up with: her family (though she could do without her mom’s annoying cat), and her best friend, Eric. Things get even weirder when Izzy loses a life while inside the game, and she starts to worry about what might happen if she gets a Game Over for good. Meanwhile, Eric has been super upset with Izzy since she’s been keeping secrets and bailing on their plans. Can Izzy survive Dungeon City and save their friendship? Read more here.

The Boy Who Thought Outside the Box: The Story of Video Game Inventor Ralph Baer

Summary: Crazy about Wii, Nintendo, X-Box, and PlayStation? Meet the inventor whose work made them all possible: Ralph Baer, creator of the first home video game system! Today, the video game industry keeps growing, with ever more platforms available to fans. But how did the very first system come about? Read more here.

Summary: In this next installment of the new play-your-way adventure tale, players encounter a haunted arcade on a deserted boardwalk. Upon entering, the reader finds themself absorbed into one of two video games in which the reader determines the course of action, ultimately controlling whether they live . . . or die! During a late-night stroll on your boring summer beach vacation, you discover a derelict video arcade managed by a ghostly attendant. Presented with a magical game token, you select one of two games you wish to play, the Excellent Ernesto Cousins 3 or Wrestlevania. Once you place the token in the slot, you have to make choices to advance through the games, and your decisions control whether you beat the game–or die. Both games feature unique challenges and life-like game play that will delight readers, and the most important choice in either game for those now trapped inside them, is the one that will keep them alive. Read more here.

The Hardy Boys: Trouble at the Arcade

Summary: The first book in the chapter book refresh of the classic Hardy Boys series. In Trouble at the Arcade, nine-year-old Frank and eight-year-old Joe Hardy discover trouble lurking at the local arcade and decide they make pretty good detectives–just like their dad! Read more about it here!

Summary: Inspired by classic video games of the ‘80s and ‘90s, this clever board book sets out to level up the ABCs. Within these pages lies an alphabet adventure, rendered entirely in striking 8-bit artwork. Young gamers will love guiding their daring hero through the story to learn new words, discover hidden pictures, and find the missing treasure in an epic quest that will have kids and adults ready to press restart! Read more here!

Escape from a Video Game: The Secret of Phantom Island

Summary: Young gamers control the action in this interactive new series from the bestselling author of Trapped in a Video Game. With more than 30 endings and an unlockable bonus adventure, The Secret of Phantom Island promises hours of screen-free fun. Cooper Hawke and the Secret of Phantom Island is the greatest video game nobody has ever played. The treasure-hunting adventure was supposed to set a new standard for gaming. Then, just one month before its release date, it fell off the face of the earth. Now, for the first time, you get a chance to play the mysterious game–from the inside. As you outsmart enemies, solve puzzles, and explore the island’s hidden areas, you’ll discover that there’s more to this game than the world realized. Escape from a Video Game is an innovative pick-your-plot story that promises two adventures for the price of one! The main adventure builds critical thinking skills by rewarding young readers for solving puzzles and making sound choices with non-stop action and huge plot twists. Read more here.

Diary of an 8-Bit Warrior

Summary: Book 1 of the international best-selling 8-Bit Warrior series that introduces the journal of Runt, a young Minecraft villager who dares to dream of becoming a Minecraft warrior! The first volume of this best-selling unofficial Minecraft adventure series begins with Runt, our 12-year-old hero, about to choose his future vocation at the Minecraftia school. His options are less than thrilling: farmer, crafter, miner. But what this noob really wants is to be a warrior like his hero, Steve. So when he learns that the five best students in school that year will get the chance to start warrior training, it’s ON. Read more here.

Super Rabbit Boy is the strongest, bravest, fastest animal in all the land. . .and he’s also the star in a video game! Animal Town is in trouble! Meanie King Viking has created a dreaded robot army to spread No Fun across the land. On top of that, he has stolen the happiest and most fun animal ever, Singing Dog. There is only one person who can save the day – Super Rabbit Boy! Read more here.

Code It! Create It!: Ideas and Inspiration for Coding

Summary: Girls can design the perfect coding-powered project for themselves in this informative, interactive book published in partnership with the nonprofit organization Girls Who Code that guides readers through the brainstorming process, provides inspiration, and teaches basic coding concepts. Illustrations. Read more here.

Summary: Welcome to Stately Academy, a school which is just crawling with mysteries to be solved! The founder of the school left many clues and puzzles to challenge his enterprising students. Using their wits and their growing prowess with coding, Hopper and her friend Eni are going to solve the mystery of Stately Academy no matter what it takes! Read more here!

Summary: Cameron Boxer is very happy to spend his life avoiding homework, hanging out with his friends, and gaming for hours in his basement. It’s not too hard for him to get away with it . . . until he gets so caught up in one game that he almost lets his house burn down around him. Oops. It’s time for some serious damage control – so Cameron and his friends invent a fake school club that will make it seem like they’re doing good deeds instead of slacking off. The problem? Some kids think the club is real – and Cameron is stuck being president. Read more here

Summary: You awaken in an underground cell, stripped of your armor and your sword. Your fellow prisoners inform you that you’re trapped in the Underdark, soon to be taken to the great drow city of Menzoberranzan and sold off as a slave. But word is that demons are stirring in the underworld’s depth. Perhaps you can use that to break free, fighter. Read more here.

Summary: Two best friends in a town taken over by video games have to outsmart digital dinosaurs in the first book in the Arcade World graphic novel chapter book series. Life in Normal used to be, well, pretty normal. Kids went to school. Kids did their homework and chores after school. And then kids met up at the local arcade, called Arcade World. Arcade World was the weirdest, coolest place. It had a collection of video games that no one had ever heard of, like Dino Trouble or Hot Dog Time. And no one held more high scores than Travis Better and Journey West. But one day, the video games in Arcade World came alive. Now, there’s a whole new normal in town–as Normal becomes a dangerous Arcade World. Read more here.

As you can see, it’s not video games versus books. Just like GameTruck parties, video game books are the cool new thing! Both avid and “books are boring” readers are bound to find a book for gamers like themselves, and don’t be afraid to pick one of these up for yourself too! Happy reading!