Blog » GameTruck News and Updates » What is the Magical Age for a GameTruck Party?

For fifteen years, we have helped parents celebrate their children’s birthday parties. One question that pops up, not infrequently what is the best age for child to throw a party? 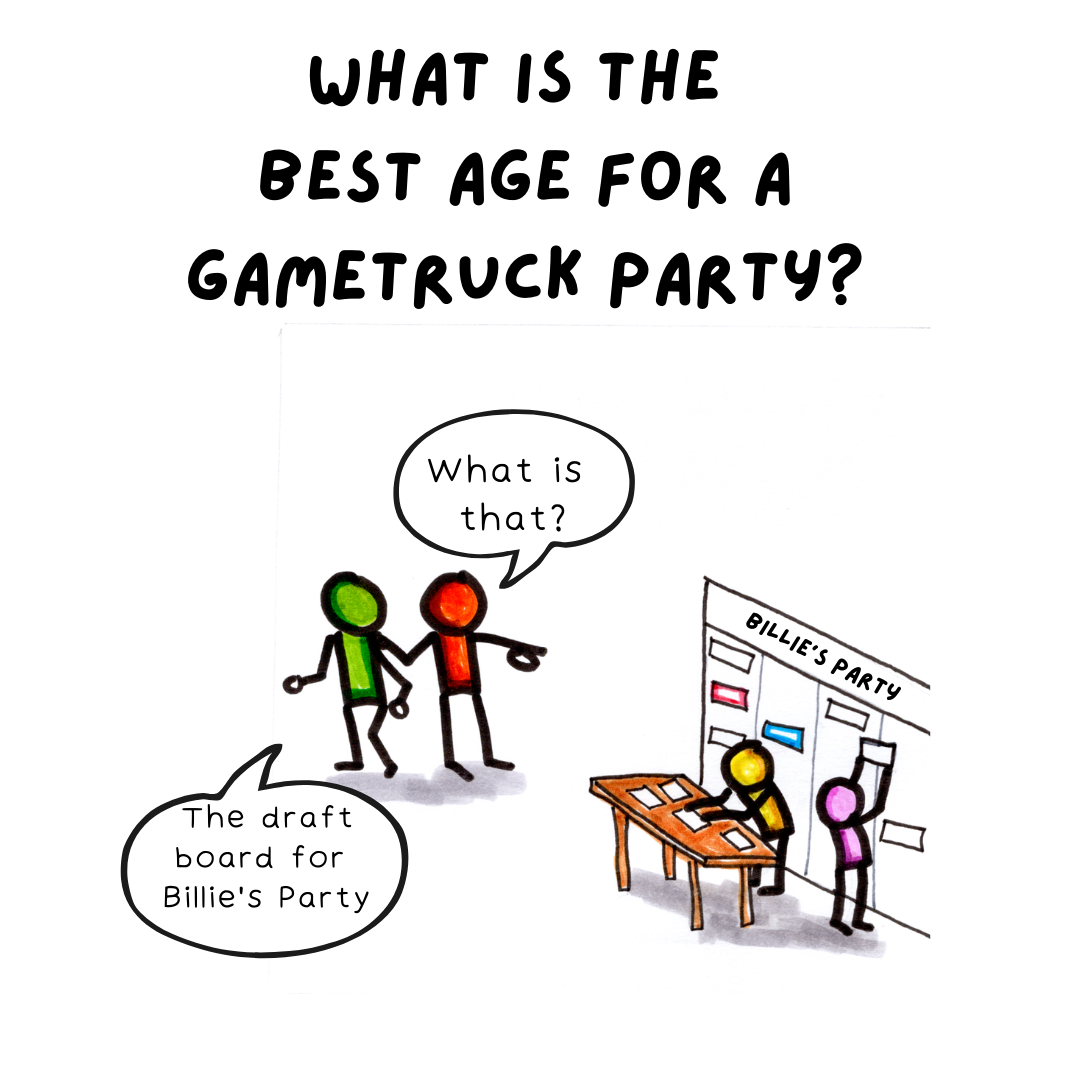 For fifteen years, we have helped parents celebrate their children’s birthday parties. One question that pops up, not infrequently what is the best age for child to throw a party?

The correct answer to that should be, “at the age you believe your child will have fun…” having said that, we do put a lower limit on the ages with many markets wanting the children to be at least 6 years old. If I look at the historical sales data, I see that that average age for a GameTruck party falls between 9.5 and 9.8 years old, a range it has held for years. The vast majority of our customers fall between 8,9,10, and 11 years old.

But if you want to know the perfect age for a GameTruck party, I will have to say that it is 10 years old. Now I know there are parents reading this might panic. Please don’t panic! You don’t have to wait until 10 to have a GameTruck party! We successfully entertain thousands upon thousands of children every year from as young as 6 and beyond.  You can check our 87% Net Promoter Score as proof our owns throw great parties for all ages.

However, if you are curious about the best age, the sweet spot, then read on.  I don’t think it is actually the child’s age that makes a difference as much as their grade. GameTruck parties really become popular in the third through sixth grade. And if there’s a sweet spot, it is that last year of elementary school.  For vast majority of kids in the US, this happens in the fifth grade when they are 10 years old.

Why the fifth grade?

Here in Arizona, most of our public schools operate in three waves. We have Elementary school which runs K-5th. Middle school runs 6th– 8th. Most of our high schools are four-year schools covering the 9th through 12th grades. The most variability happens at the elementary and middle school boundary, where some schools run K-6 with a two-year middle school, and others operate as I described.

The reason the last grades in elementary school are so enamored with GameTruck is partly cultural, and partly developmental.

When kids are in elementary school, parents want to expose their kids to as many sports (and activities) as possible. We did this with our kids.  They played soccer, they played tee-ball, and basketball, and even flag football. At a young age, – I mean like in Kindergarten – simply getting them to participate was a chore. Most of the time this an exercise in corralling rambunctious little balls of energy.

For many parents, team sports have become the de facto way to socialize and exercise their children. Elementary schools is when kids are more or less thrown in together, and friendships are made through a combination of trial and error and through spending time together.

As the kids grow and advance through the grades, however, there is typically a sport that captures the imagination for a majority of the community.  In South Tempe it was Little league. Everyone played little league whether they wanted to or not. Why little league? It is one of the only sports organized around schools.  Therefore, kids play with and against their friends.  Many other sports invite children from a much wider pool and you might compete with people you will never see again outside of that one game.

I know we had the feeling that if our kids did not play Little League, they would be left out. In different cities and different parts of the country other organizations have this kind of pull.  I know in Long Island they have a tremendous youth soccer league. North Scottsdale is dominated by flag football. The combination of community involvement, organization, participation, and municipal support with access to good facilities all play a role in elevating one sport to a focal point.

These sports activities become a kind of “binding agent”, when coupled with school really create the social fabric for most of our children’s lives.  There is one curious thing about both school, and sports.  The kids are not in control.  Adults are.  So the most powerful force in a young child’s life in terms of forming friendships is managed by adults.  I believe that is significant and plays a party in why GameTruck parties have a special meaning for fifth graders.

It is not only school and sports (or other activities) that shape a child’s social life.  Children go through a process of socialization that starts with the parents and expands toward finding and identifying with a friend group.  I noticed that as my children gained an increase in mobility, they expressed more of their individual personalities. When they were infants confined to a bouncy chair, they strongly identified with my wife. In fact, they might cry sometimes when they could not see her. Infant-parent attachment is well researched and supports the idea that as children grow, they expand their identity with the primary caregiver, to include the family.  When they go to school, this next level of mobility leads to an expansion of identity that includes other children their age.  By the third and forth group, children are actively seeking out friends and connections, but the patterns are subtly different at 7 and 8.

I saw it when I coached Farm Baseball (7 & 8).  We also noticed a sharp divide when we worked with younger kids in our Bravous Esports programs. There is a noticeable difference between 7&8 and 9&10.  While there are many gifted gamers in the younger age brackets – socially, they are in a different space.  Most children in the 3rd grade are just learning how to read which makes it hard for them to act independently. Yet they have a strong desire to, “do what the big kids are doing”. Their sights are focused on the older kids, but the older kids seem to be aware of those around them and the younger kids are like furniture, present, but not terribly relevant for social connection.  This could have to do with their capacity for grasping and processing more abstract concepts.

Let me give you a concrete example.  In Little League Farm (ages 7 & 8), we did not keep score and there were no winners or losers.  However, I could get the kids fired up by telling them when they were hitting, “We are down by one run!  Let’s get some hits.”  When the inning was over, the kids would ask, “How did we do?” I would tell them, “We are up by one run, you better get out there on defense and hold them.”  I could do this inning after inning, game after game.

By 9 years old, players were eligible for the “Minors”, where they kept score, teams could win or lose, and the kids pitched to each other.  (In farm they used a pitching machine).  Suddenly the kids had a very good sense of who was good, and how was not.  Everyone knew the score, one multiple levels.

While the younger kids strove to act like the older kids, the “older kids”, were starting to discern and select their friends based upon criteria that was important to them, not the adults.

One of the reasons GameTruck Parties are so ideal for kids in the  fifth grade, is that their birthday party is their chance to “pick their own team.” While we do everything we can to make sure everyone at a celebration plays (see No Lone Wolves ), the birthday child gets to pick the games they want to play and who they want to play with. For most of their lives, their teammates have been picked by adults. Kids have very little control over their environments and social groups – however with a GameTruck party, they get a chance to start to exercise social choice in a new way.

Unlike other birthday party concepts that emphasis putting as many people as possible into the same space as possible to create as much energy as possible (doesn’t that just sound like a terrible idea in 2021?), those kinds of environments make the birthday child just another passenger in their own life. The adults are driving, and what happens, happens.

With a GameTruck party however, the coach identifies the birthday child and singles them out to play on the first screen.  They are then told they can play whatever they want with whoever they want. For many children, this is an enormous leap in self-determination. Kids understand that they can play what they want by themselves, but to choose the game that their closest friends get to play? At ten years old most children understand how truly special that is.

I personally believe this is one of the reasons so many children have told their parents, “this is the greatest party I have ever had.” Not simply because the games are great, not simply because the environment is cool. Children recognize the level of maturity and responsibility that is being entrusted to them by the adult Game Coaches. They get to choose what to play and who to play with, and that is a big deal.

Everyone can have fun, but the experience is different for everyone.

When you entertain 10 million people, you see a lot of things. I am still convinced that video games offer something for literally everyone if done right.  I have come to believe that 10-year-olds attach a special significance to a GameTruck party. At the intersection of school, extracurricular activities, and their own personal development as individuals – they see a GameTruck party as a unique blend of entertainment and choice, of competition and camaraderie. Of all the ages that enjoy GameTruck, I do believe that 10-year-olds are in a unique position to get absolutely the most from the experience.