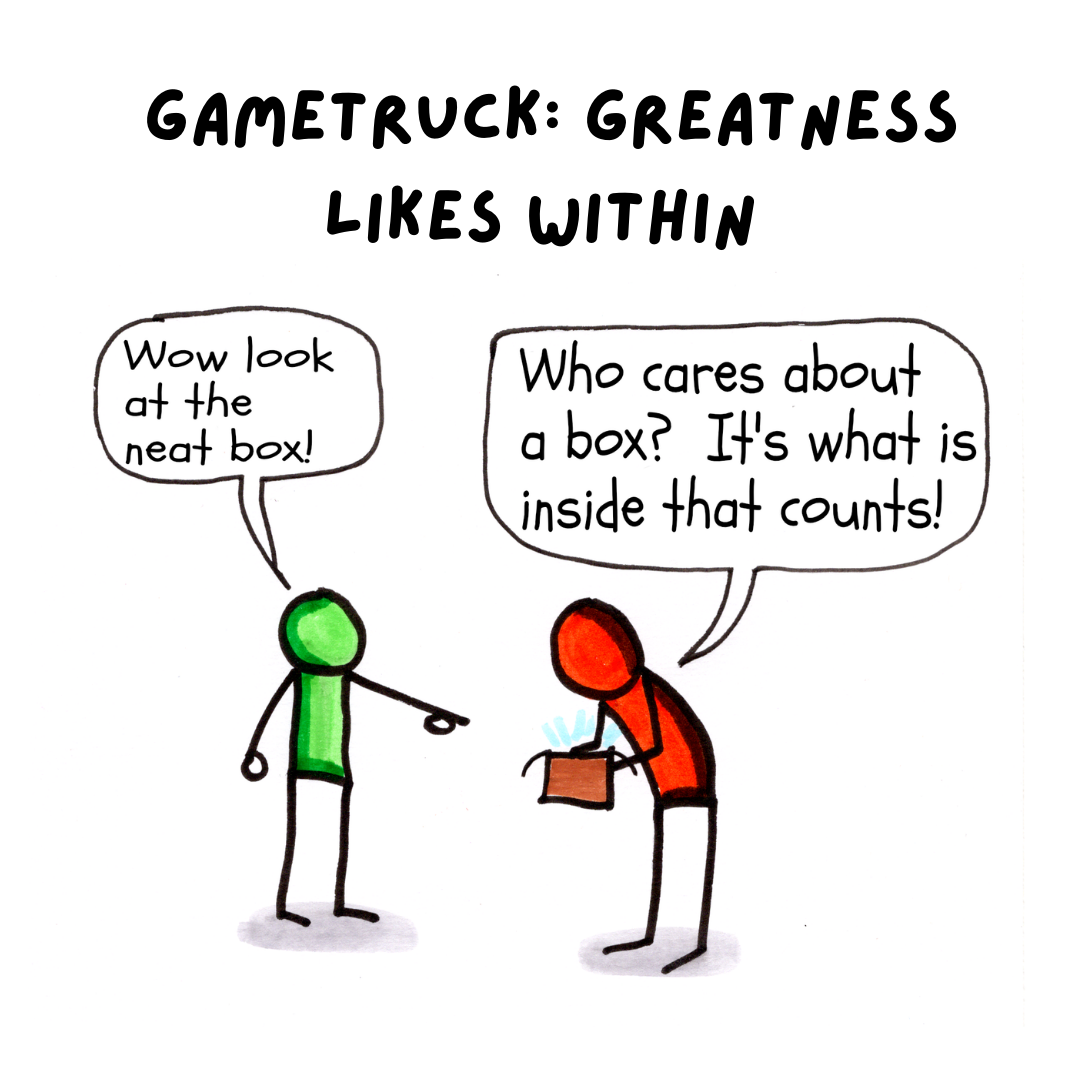 One of the most commonly asked questions I receive is, “how did you think of GameTruck?” What people really mean is how did I come up with the idea for the game theater. The reason I think it’s so surprising for people is that they experience GameTruck in the exact opposite order I thought about it.

Here’s what I mean. When you see a GameTruck mobile video game theater pull up in front of you house what do you notice? The giant billboard being pulled by a massive 3/4 ton pickup truck right? It’s this HUGE box. Then we open the door, and you get to look inside. Most people gravitate to one of two things first – either the first TV (because it’s playing an awesomely colorful video game in high definition) or the game wall, which is covered with scans of the video games available for kids to play.

Once you step inside the trailer, nearly everyone says one word, “Wow”. They now see all the screens. What’s more they see a huge couch (no arm rests) so all the players can pile inside together and play. Then they notice all the video game consoles. The combination of light and sound with so much choice immediately captures everyone’s imagination. Only after that do most people even notice the coach standing there, ready to help deliver an incredible party.

That is how the vast majority of the people experience GameTruck – from the outside in. However, that is not how I designed or thought of GameTruck. In fact, I started with something you can’t see. How a party will feel to gamers. When I ran Rainbow Studios, we had virtually none of this. We were a bunch of nerds playing games in our offices on a conference line over the local area network of the company.

When I began to imagine GameTruck, my goal was break down barriers – like a truck crashing through walls. I wanted everyone to be together. (One of my fondest memories was playing ATV Off-road Fury in Robb Rinard’s office until 4 in the morning as the game neared completion and the tuning was near perfection). Playing games together was fun. When I started thinking about video game parties, it was not arcade cabinets or personal computers that captured my imagination of powerful new home video game consoles. How could I get these all-in-one spot? And how could I hook them up so they could play together? Halo could system link 16 players together on just four screens. Mario Kart Double Dash on the game cube could do something similar with the GameCube. Even Ratchet and Clank on the PlayStation 2 had a system link mode. Yes. That’s how long GameTruck has been running.

My point is playing together was, is, and will continue to be, the heart and soul of a great video game party. Once I had the prototype built in my garage, my next question was, “how on earth am I going to move this thing around?” In other words, once the experience was designed, we had to create a room for it. Preferably a room on wheels. The very first trailer was a 24 foot long two behind with generators in the back of the pickup truck. We learned quickly that was not an ideal situation as plugging, refueling, and managing separate power was a problem. Then we moved to goose neck trailers – ones that could be towed like a 5th wheel (for a fraction of the cost). At one point, we deployed class C motorhomes custom built by Jayco, the legendary RV company because most people are more comfortable driving an RV.  Think of how amazing our GameCoaches are! Pulling a 30-foot trailer can be intimidating!

During all this time, the vehicle did not matter. What mattered was the experience inside the box. For a little while we flirted with trying to charge different amounts for different trailer configurations but in reality, that had more to do with how we saw the equipment, not how the customers experienced the games or the party. What’s more, the different sized trailers were really tailored to make it easier to get places without compromising the play experience.

In short, I never cared much about the truck, or the configuration of the box – what mattered most was the experience we delivered to the birthday VIP and the guests. Why? Because people don’t rent a truck and trailer from us, or even video games. 99% of parties are booked by one person trying to make another person happy. No, more than that, they want party VIP to feel loved and cared for. We are not selling equipment but an emotional experience of love and wellbeing. I mean, when was the last time you woke up without a care in the world? It’s probably been a long time, right? And then someone says to you, “you get to do your favorite thing in the whole world with people who love and care about you.” How awesome is that? This is the business we are in. Helping people demonstrate through play the love and care they feel for the most important people in their lives.

The simple truth is like a book, or most people, you can’t judge a book by its cover. The shape, towing configuration, and mechanics of the trailer and tow vehicles are, and always have been a means to an end, not the end in themselves. That is not where the fun is. The fun is inside. The fun is where the gamers play. And this is why we have been in business for 15 years and have helped more than 10 million kids play together. Because no matter the shape, size, or look of the outside of a GameTruck video game trailer, they all deliver awesome on the inside.

If you are thinking about hiring us to help you throw an amazing party for someone you love, don’t get hung up on the equipment. It’s not the box, but what’s inside that makes it such a special party.