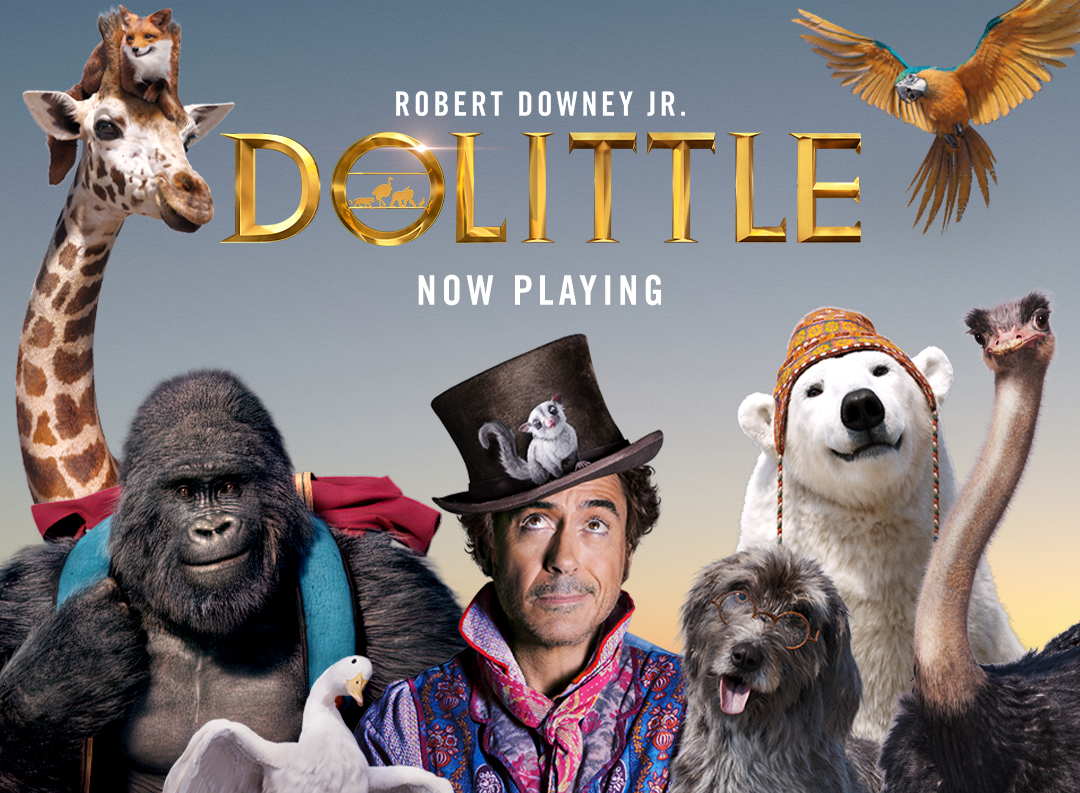 This review was written to help you determine if you should take your family to see this movie.

I took my family to go see Dr. Doolittle this weekend, and it was something that I greatly regret. I thought that this movie would be a fantastical, whimsical, funny trip through history and fantasy. But instead, I found a plotless storyline with all-star actors who all seemed to play on their own teams. Unlike my last movie review: Sonic The Hedgehog, which hits high marks in many different areas.

The premise of the story takes place in 19th century England, where a professor named Dr. Doolittle can speak to exotic animals. He’s granted an estate by the Queen of England.

He travels the world, collecting and speaking to these animals with his wife, Lily.

Lilly then disappears at sea and Doolittle disappears from the world in a very predictable fashion.

Throughout the entire movie, I found myself having to explain to my children what was happening. There was one point where I took my son to the potty and he was more interested in playing with Spongebob than going back into the theater.

My children are four and five years old, and although my five-year old can read very simple words like in a Dr. Seuss book, she really can’t grasp the context of words that are on a screen. This movie has many different types of those instances to set the scene for different areas of the movie, and without those words being there, you would have no idea if you didn’t know how to read what was happening in the plot. The dialogue and scenes don’t go far enough to make it super obvious.

This was very annoying to me as a father because when I bring my children to a movie, I want them to be entertained and understand what’s going on. I want them to follow the story. Throughout this film, my children had no idea what was happening. I had to keep explaining things to them and often received a glossed over look in return.

There were some really funny moments in the movie that director, Stephen Gaghan got right. There were probably four or five instances where you just laughed out loud at some of the jokes, but in a two-hour movie that has no plot, four or five instances of laughing-out-loud doesn’t work. Sadly, throughout most of the film, you’re just kind of going, what is happening here?

It didn’t take me on the roller coaster ride of emotions, up and down. There were some fun moments but for the most part, this movie misses the mark on many levels in terms of the way a movie is supposed to make you feel.

Robert Downey Jr. should stick to playing roles like Iron Man and Sherlock Holmes as his Dr. Dolittle missed the mark in many respects. He didn’t stay true to the character, the entire movie. He tried to force comedy, which never works. And it seemed as though he really didn’t have any idea where he was going on his journey throughout the film which led to awkward, pointless dialogue and moments that left me scratching my head.

On a positive note, Emma Thompson does a very good job playing Polynesia, the parrot. She is the glue that somehow strings this movie together. If it wasn’t for her character and performance, this movie would have completely fallen apart (more than it did). The choices she makes as the parrot throughout the entire movie entertains and does a great job of explaining where so many plot holes fail.

Tom Holland plays Jip, the faithful best friend, a.k.a. dog, of Dr. Doolittle. Holland does a fantastic job of portraying this very wise and smart dog who helps Dolittle diagnose the gravely ill Queen. It’s unfortunate that Holland doesn’t appear more in the movie. If he had appeared more, it would have enhanced and added to the film quite nicely. But instead, the story calls for him to stay by the Queen’s side, as Dolittle goes on his journey to grab the necessary items, in a land far away, to heal the queen.

Michael Sheen plays the villain in this movie. Full disclosure, I typically like how Sheen plays a villain. (Sheen was great as Lucian in Underworld) But he plays Mudfly in a mundane and almost campy manner. You don’t get the sense at any point that he will win the day. A good villain delivers a performance that matches that of the protagonist. However, considering Robert Downey Jr.’s performance, I guess this is to be expected. Unfortunate indeed!

If I were you, and I had a family, I would wait to explore this movie when it comes out on Netflix or Amazon Prime, or one of the streaming services. At least when you stream, you can watch it for free (or close to it) and don’t have to waste $20 to $30 on a family trip to the movie theater.

Do yourself a favor. Wait a few months, warm up some popcorn at home and be in an in a spot where you can easily turn off this movie and go on to something else, if need be.

I give this movie 4 out of 10 Game Cartridges.