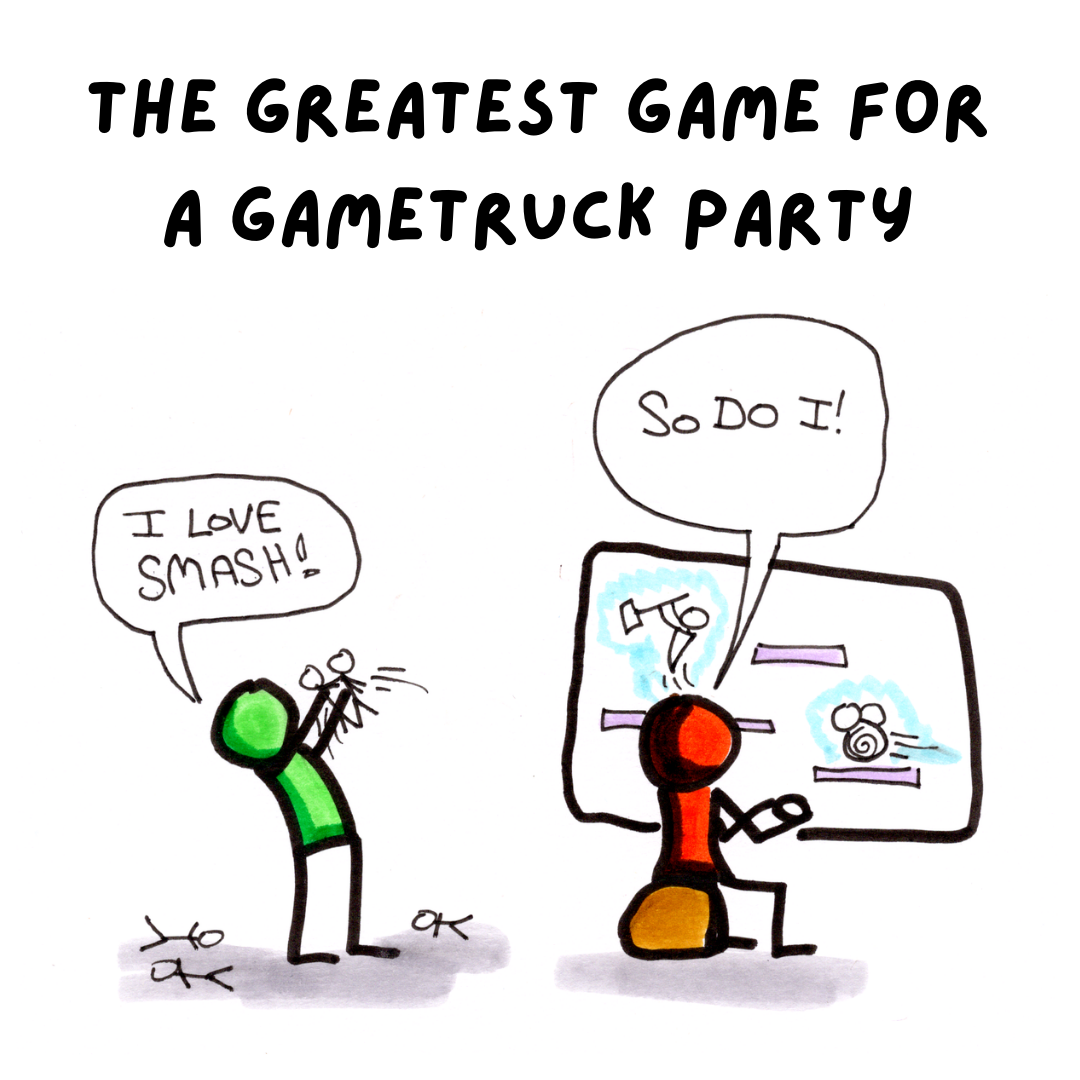 When a gamer first walked into a GameTruck game theater, they are hit with a wall of color and sound. The screens are full of games cycling through their “attract animations” built in commercials that show how fun and engaging each game will be. The Game Coach greets them and rapidly gets them situated and into playing.

While there are differences, from market to market, and region to region as far as games go (for example, in the Northeast, NHL Hockey is a must, while in the Southeast NASCAR is frequently requested), there are usually some variations of the following games that have been on our trailers for the better part of a decade.

These are the games that

This list is so stable that it was an enormous deal when Fortnite forced its way into the list of games that make a regular initial appearance at most parties.

The list of games is easily recognizable, but there is one game, that in my opinion stands above all the rest. It might not be obvious, but even if you don’t agree, I think you’ll at least understand why I am such a fan.

The following is a list of games you are most likely to find at the beginning of a party, in no particular order:

Of all the games on this list, I believe that Super Smash Bros Ultimate, or just “Smash“, is the king of party games. And here’s why.

Smash is special for a variety of reasons. Developed by Legendary Nintendo President Satoru Iwata and Masahiro Sakurai while they worked at the HAL Laboratories (this was before Iwata joined Nintendo), they created the game in their spare time. Iwata would code Sakurai’s ideas and they would play the results. They wanted to put something together quick so they could try out the idea. The original prototype did not even have Nintendo characters in it. “After the first round of programming, we knew we had something special, ” said Iwata. [1]

Neither of them imagined the game would grow to the legend it has become. However, Smash was unique in that the game benefited from more. Iwata did not believe that adding more was necessarily the best way improve a game. In my own experience as a game developer, I saw this played out in our most successful original property ever, “ATV Off-road Fury.”

ATVORF (the name was a mouthful), originally started out to be a launch title for the PS2. We had included 38 tracks. The producers at Sony, realizing we had something special did the unthinkable. They cut the game to 12 tracks. The team almost quit over it. Imagine having two third of your work thrown out.

However, this decision forced us to pick only the 12 best tracks and then polish them to perfection. But that was not all, Sony decided to delay the game until February, giving us an additional 4 months to work on it, but with one critical constraint. We could not add any new features. What did we do for 4 months?

We removed every annoying thing we could find. The game became significantly better by subtraction. ATV went on to sell 40,000 units a week, for years culminating in roughly 10M units sold.

Yes Smash, as Iwata noted, was special. It did benefit from more. More characters, more modes, more stages. The game is genius in both its simplicity and its depth. The core concept mimics the play of action figures. Early versions of the game in fact features giant hands that “smashed” these beloved action figures together, much as a child would do with their own toys.  However, in Smash Bros, the characters really do get to “fight”.

But it’s not simply the premise that makes Smash special, but a number of features.

Of all the games we play, Smash has been one of the most consistently popular games for more than 15 years. While some games have come and gone (like Guitar Hero, or Wii Bowling), Smash has persisted. The ability for so many players to jump in, find their favorite character, and go to town is incredible.

What’s more, an 8 player Smash battle is something that is hard to replicate at home. Our consoles have all the characters unlocked which allows the players to pick from the full library of characters. They even have a way to allow every player to pick the same character (they just have to pick a different color or “skin” so they all appear unique.) Let’s just say an 8 player Ganondorf battle is more entertaining than you ever imagined.

Smash is more than a game; it feels like a toybox full of surprises. There are so many ways to configure the game, so many characters to pick from, players gravitate to Smash without hesitation.

This is why I feel confident in outlining Smash as the greatest GameTruck Party video game of all time. Of course, this is up for debate, which is what makes it fun. Do you agree? What is your favorite game to play with friends? Reach out to us on social media and let us know. 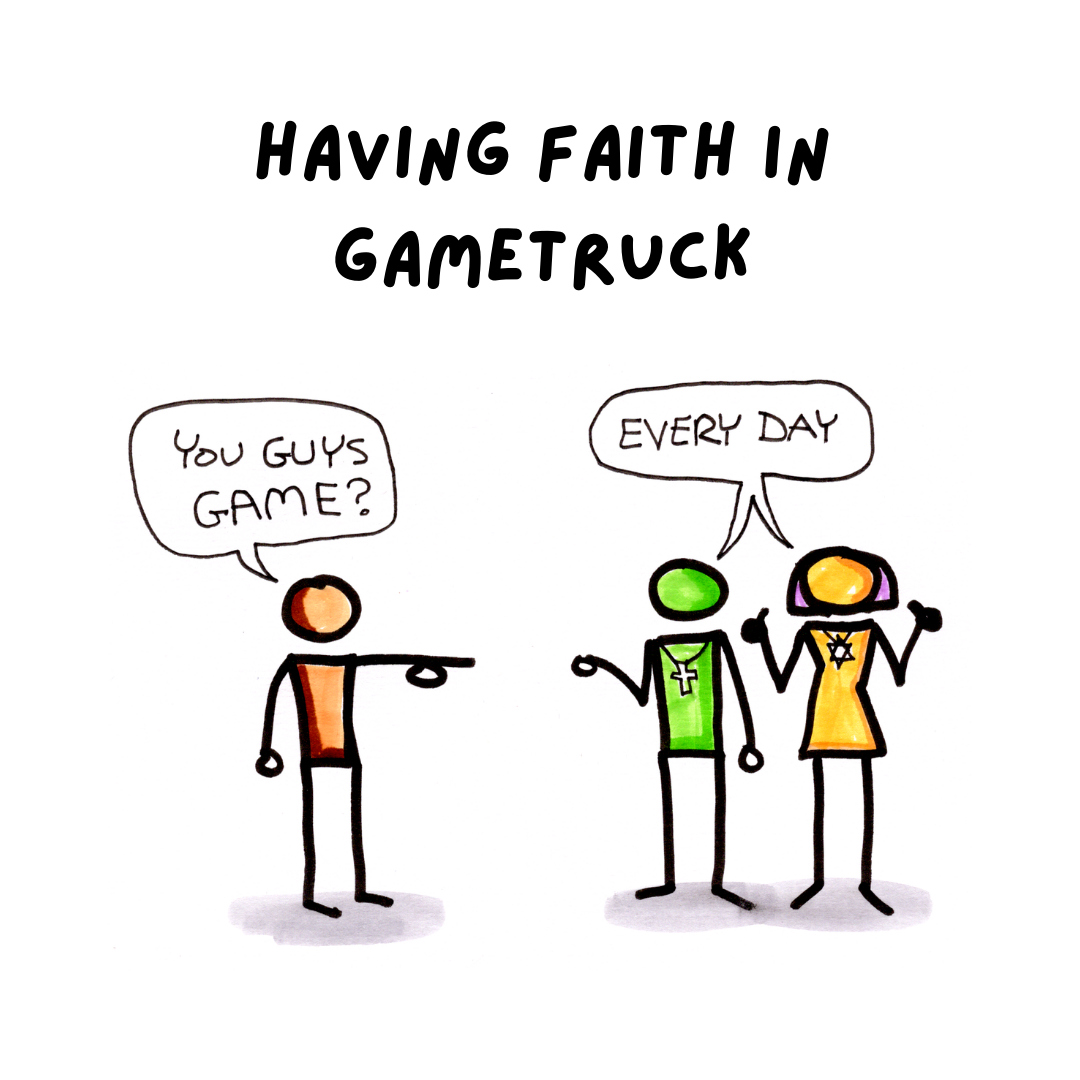 Many people are surprised to find that GameTruck is popular with Churches. This is usually because there is so much negative publicity around video games that it is easy to get the wrong impression and think that all games are unacceptable.

The truth is that video games are a form of mass entertainment, like movies, books or music and there is something there to meet everyone’s needs. Let’s not forget, GameTruck can bring more than video games. Here are just a few of the kinds of events that we help host at Churches, Synagogues, and Camps around the country.

What is so great about GameTruck is that we adapt to help support your local community values. If you want a completely Mario experience, we can do that. Minecraft? We have it. If you want to focus on sports and host a Madden, NBA2K, or FIFA tournament, we can do that too. And of course, with GameTruck @ Home, you can separate games for age appropriateness. The teens can play Fortnite in the Gym while the younger gamers can play Mario in the trailer.

However, it is not the equipment that matters. The reason so many clients book with GameTruck year after year can be summed up in one word; Professionalism. Our coaching staff has an enormous positive impact on gamers. As adults who care about games, they often create a connection and validation for the players that is hard to come by. Our coaches understand the games, and the players passion. What is more, their professional approach to working these events makes it easy for your organization to host an event.

We understand that playing at Church or Temple is different than playing at home. Respect, fairness, and fun are all part of the package. Understanding that it is important that the whole program proceed in an orderly, predictable way is part of what people are looking to buy.

They don’t want equipment. They want happy, engaged kids, often times from different age groups. The dedication of our staff meets that need. They understand player interests and how to help them all play together and have more fun.

Whether GameTruck is part of a carnival, or the stand along attraction, our staff know how to manage moving players through the games at a steady pace to make sure everyone gets a fair turn. We have done events, morning, noon, and night.

Whether it is for a Young Life Laser Tag Camp Day, or a Reach the Teens game night, our staff can create an experience that gets everyone playing together in some good wholesome fun.

In all our events, we always strive to make gaming an easy option.

This might be why so many organizations have elected to put their entertainment faith in GameTruck.

We deliver stress free fun in a wholesome format. 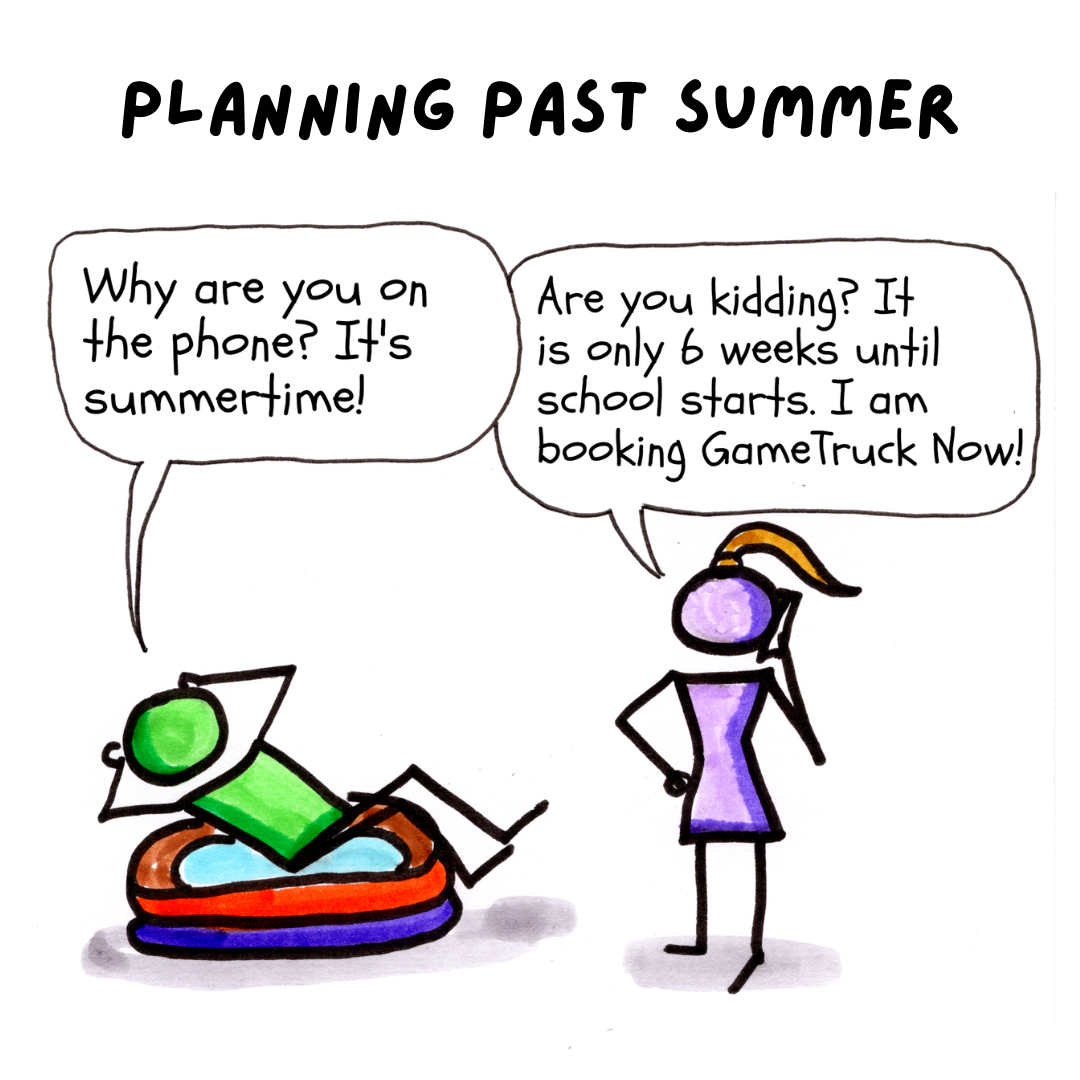 Planning Past the Summer

As the United States begins to open again and people return to meet with friends and family, it seems fairly obvious that there is one area of our lives that many will miss out on the big reunion this summer. Schools. In many parts of the country, schools never quite got back to full in person classrooms and they ended just as summer arrived. With more people being vaccinated, we are looking ahead to anticipate what school will be like in the fall. While many are still being cautious, it feels inevitable that students will be returning to campus, following the lead of the major universities.

I bring this up now, because six to eight weeks from now is when school will be back in full tilt. In all my years of GameTruck, I have never seen a summer like this. Demand remains remarkably high as people reconnect and reunite. It stands to reason that the same thing will happen once school starts up in September around the country. This will impact not only schools, but also birthday parties. When parents return from family vacations, that is the time to celebrate with friends from class.

There’s no doubt that GameTruck is ideal for birthday parties, however over the years we have really dialed in the experiences for schools as well. School events are fundamentally different from birthdays in a number of important ways.  First, fairness and everyone having an equal turn is of utmost importance in school events.

Having games that appeal to both boys and girls in equal measure is also very important. A birthday party can be a rowdy riot. However, at school no one wants a party to get out of hand. Therefore, our coaches work to keep everything fun, but orderly. The goal is to create a safe environment where all the kids are welcome to play.

To pull all this off usually means extra setup and tear down time to allow for entering and leaving school property. Pulling into a crowded school parking lot is quite a bit different than pulling up in front of someone’s house. The main point is that the GameTruck staff understand these differences and they work to make sure the event is accessible, orderly, and most of all fun for as many players as possible.

The other reason to plan ahead, is that many GameTruck franchise locations offer a wider variety of services, from LaserTag, to Gelly Ball, some have Soccer Darts, and GameTruck @Home (which can be brought inside a facility). Planning ahead can allow a school to secure all of these services.

By maximizing the number of kids who can play at the same time, schools can really stretch their engagement dollar.

As the reopening sweeps the country, more people than ever before are rushing to reunite and re-engage with friends. One critical part of our children’s lives missed this wave – the schools. While the fall semester may feel far away, in just 6 to 8 weeks, kids will be back on campus.

Sooner than you think it will be time to start planning fall festivals, team celebrations, and fall birthdays. Leveraging our unique experience and staff, you can have an amazing event that brings people together through play.

So, mark your Calendars and don’t wait until the last minute.