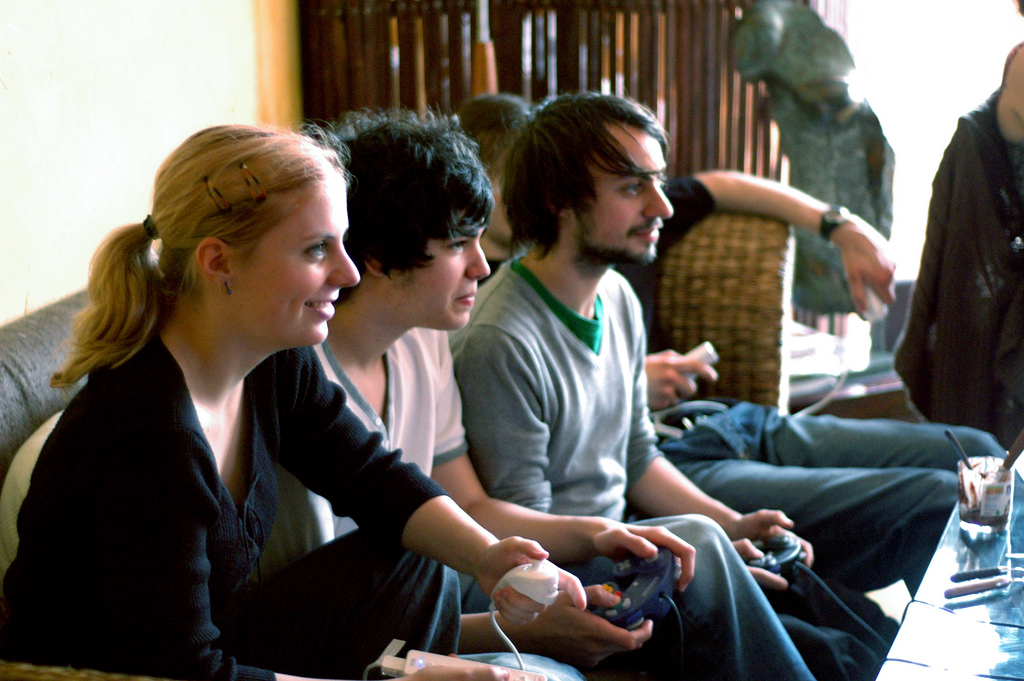 Communication in the workplace is essential. To be able to create effective communication between team members, the work environment must be free of conflict, tension, and must have a natural connection between its people. Creating bonds is where gaming can be impactful in accomplishing a set relationship and communication between the group. Whether it’s setting time in a day where the team can unwind playing video games online such as Overwatch, or creating a monthly or annual trip, gaming could be used to help the team work better together and build stronger relationships. Corporations like Intel are experimenting with new apps that add a social networking and gaming element to their systems to facilitate company events and help team bonding. Though a bit of competitive spirit and camaraderie among coworkers is excellent, always keep a goal in mind to facilitate and better the team to become more productive and efficient.

In a research project to find out the secret to creating the perfect team, Google found that the secret to building the best team isn’t about putting together people who mesh well, but by creating group norms and impacting the dynamics of a team to be more efficient. An idea brought up by Brian Sutton-Smith, a developmental psychologist of play, came up with the idea that the opposite of PLAY is not WORK, but DEPRESSION. Looking into the minds of gamers, his research as well as many others, found that when we play video games there are two regions of the brain which are hyperstimulated. One is most responsible for goal-orientation and motivation. When we play games, we are so focused to complete the goal (especially before our fellow team members), we feel a rush of accomplishment and self-confidence for completing a job and doing so feels as if it’s a reward in itself. This constant keeps the player focused on getting better until they can beat a level. It’s precisely this resilient behavior you can expect from a gamer whose brain is primed both to accomplish a goal and to gain confidence to learn and get better. The sort of behavior trait you want in the workplace.

3. Gaming stimulates the brain and helps get the mental and creative juices going.

Studies also show that gaming can help stimulate the brain and encourage the creativity. The other region of the brain that is constantly stimulated while a gamer is active is the hippocampus, which is responsible for memory and learning. Studies show that skilled players mainly use their frontal cortex, which is an area of the brain for planning, attention, and multitasking. There is always a learning experience when it comes to games. Every time a game starts, the player must learn the rules and figure out different strategies to improve their skills to help them get past each level, which helps them with their problem-solving skills.

So seeing how much gaming can help build teamwork, now is the time to start planning an event to increase your team’s collaboration. With our expert Game Coaches and state of the art equipment, Game Truck Richmond can create the perfect team event for you! Whether you want a Video Game Party, a LaserTag Arena, or a game of BubbleSoccer, GameTruck Richmond can find the right team event for you. Go to our website or call (804) 938-1337 for a free estimate or to book a reservation today! 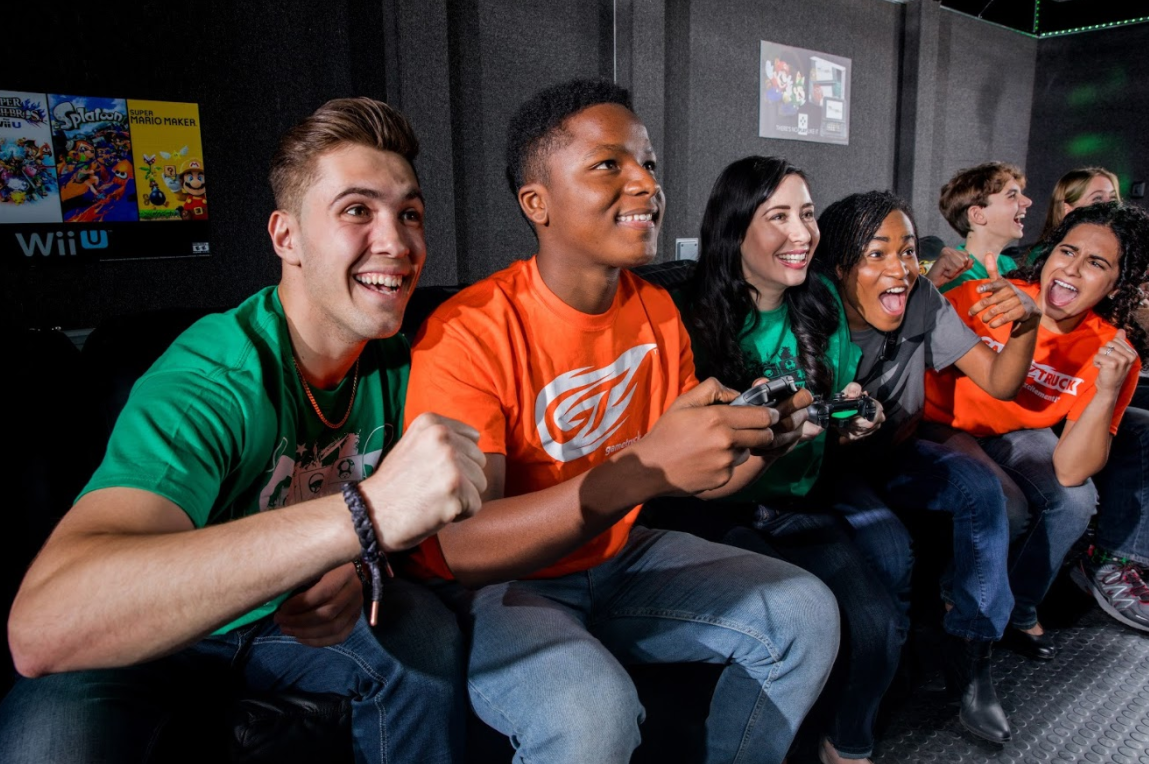 Party planning is never an easy feat. Sure, the end result is always worth it, but the stress of organizing combined with the hassle of taking care of the small details will have you ready for it all to be over.

Even though it pays off in the end, you may have some demanding moments as you try to handle logistics, all while enjoying the party yourself. What if you could avoid the tension and still reap all the benefits of throwing an awesome event?

GameTruck Chicago is the perfect solution to a problem you didn’t even realize you had. We have party planning experts on-hand who can help you prepare for your event, and our mobile video game parties bring state-of-the-art entertainment to your doorstep.

One of the many reasons GameTruck stands out from any competition is our industry experience. We were one of the first companies to realize the power of mobile video gaming parties, and we’ve perfected our business plan over the years.

Another reason? The team’s dedication to customer satisfaction. We want everyone involved with your event to leave thinking about how much fun they had, so we work to make it happen. Our GameCoaches are video game experts and can advise anyone from a casual player to a serious gamer.

Every GameTruck Chicago party includes personalized digital or downloadable invitations, space for up to 20 guests and more than 60 video game titles. Whether you’re a fan of competitive games like FIFA 17 or prefer the fun of Just Dance, we’ve got something for everyone.

Call in the Video Game Experts

What are you waiting for? Reach out to GameTruck and let the experts take care of this one. Our video game coaches bring a one-of-a-kind wow factor to every GameTruck event. We take the stress away because we’re dependable and always place your needs first. Call us at 866-253-3191, or click here to get a pricing quote.

What are some of the oldest gaming consoles you have at home? Maybe you’ve got a GameCube or Nintendo 64 lying around. Unless you’re a serious collector, you likely aren’t regularly playing Atari games.

Even though there’s much-deserved hype about newer consoles like the Nintendo Switch, our team at GameTruck Savannah has an appreciation for the old days. Let’s take a look at some of the first gaming consoles to see how far we’ve come.

In 1972, the first ever gaming console was released. It didn’t do well commercially – only about 350,000 units sold – but the consoles go for $400 today, so hobbyists appreciate the system. The Odyssey couldn’t play sound and came with physical dice. When compared to today’s units, it’s pretty much unrecognizable.

A few months after the Odyssey was released, Atari brought some competition with Pong. Pong was first released as an arcade-style ping-pong game (as the name suggests) and later evolved into a console that was sold through Sears.

This console became wildly popular because of its affordable price point. It sold for $50 (which would be about $221 today) and sold over a million units. The console allowed gamers to play tennis, hockey, handball and jai-alai.

Developed by Mattel Electronics in 1977 and released in 1979, the Intellivision was advertised as an “intelligent television” and was intended as a competitor for the Atari 2600. It debuted with four games available but was loved by gaming fans – more than three million units were sold during its heyday.

The Nintendo Entertainment System (commonly abbreviated as NES) changed the video game market. Originally released in 1985, this console is still a favorite among collectors and hobbyists. The NES is also notable because Nintendo allowed third-party developers to make games for the console. Once games didn’t have to be developed in-house, the number of choices increased dramatically.

If you’re a gaming lover, consider reaching out to our team at GameTruck Savannah. We offer premier video gaming parties for video game aficionados of all ages. You’ll have the time of your life in our state-of-the-art mobile theater, and we’ll bring the party to your home, office, school or anywhere else. Click here for a free quote, or give us a call at 866-253-3191.