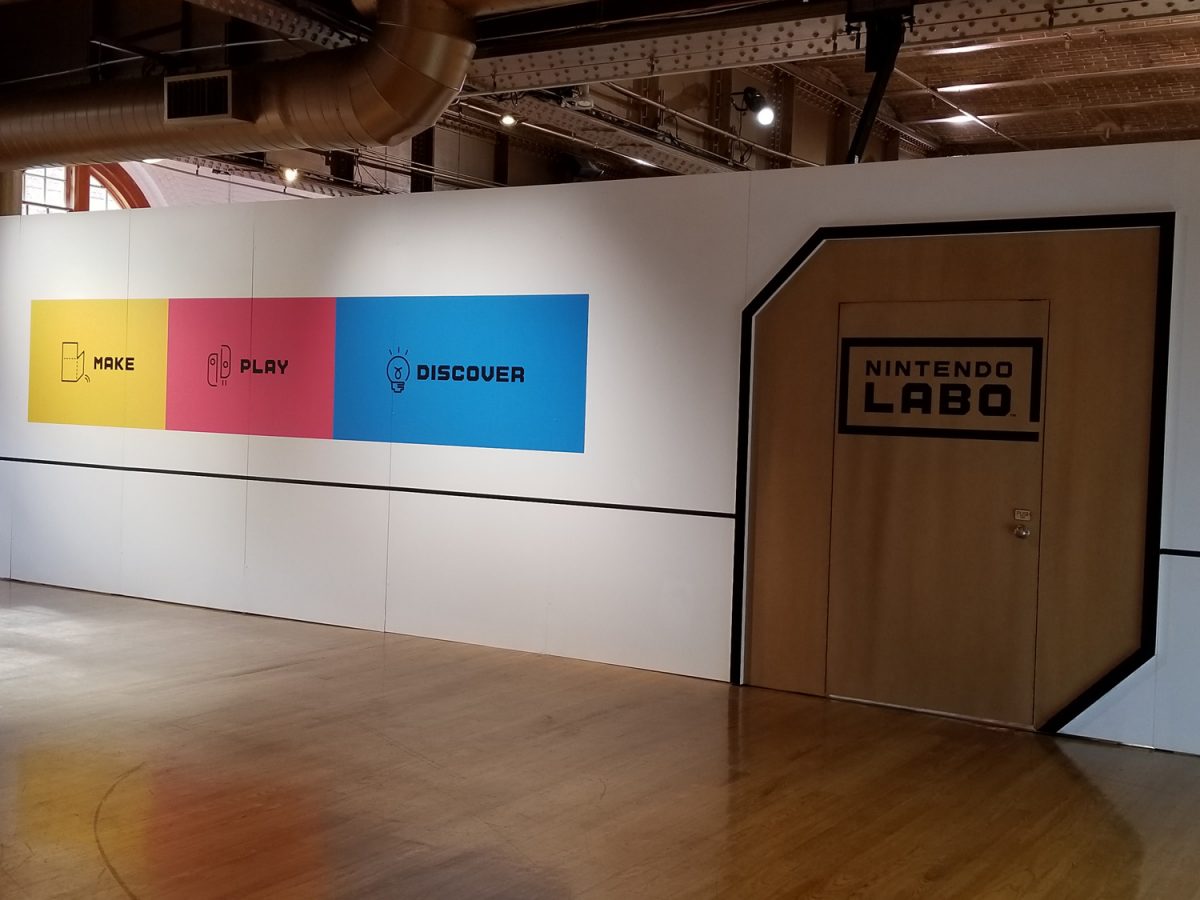 A few weeks ago Nintendo dropped a video of a very intriguing and highly aspirational product (as Nintendo seems to do), Nintendo LABO. What is LABO? LABO is an attempt to capture a foothold in the Maker and STEM (Science Technology Engineering & Math) spaces of Schools and camps by making gaming kits that require you to also build the peripherals that you will use out of tightly compacted cardboard. Nintendo being Nintendo though, this doesn’t feel like a simple ploy to simply sell consoles to people but rather to get people to change the way that we view gaming. LABO will launch on 4/20/2018 with 2 kits, a Variety Pack that includes 5 different builds, and an ambitious robot suit that allows you to move and transform into the Robot on the screen.

At the products reveal they also announced that they would be holding special preview sessions in New York and San Francisco and I was lucky enough to get a space in one of the first groups to experience LABO. This event was quite a bit smaller than I’m used to, almost more like a highly orchestrated focus group than a mere product presentation. Snacks in cool Nintendo LABO tins were readily available, because who doesn’t love M&M’s, Goldfish, and Gummy Bears, and everyone was seated at work tables in circular pattern facing towards the presentation area. During the event we were able to play with all aspects of both kits, as well as build 2 of the pieces from the Variety pack; the RC Car and the Fishing Rod.

The RC Car is very much reminiscent of the Nano-Bug toys that you can purchase. While it may not be the fastest thing that you will ever race (by any stretch), the way that it operates is quite astonishing. You construct the RC Car using the cardboard and then slide the 2 Joy-Con in to the sides of the unit much like you would on the Switch itself. Once the Joy-Con are inserted the screen portion of the Switch turns into the controller. The Joy-Con rumble to life on either side and begin to propel the unit with a buzz. You steer the unit by letting up on one side or the other to turn, or pushing both sides to move forward. Once you “open up” the controller console though, you see that the RC Car is much more than a it’s name implies. Using the camera in the right Joy-Con as it’s eyes, you can instruct the RC Car to go into auto pilot. When it’s in close proximity to an object it can see it will move towards it. If you use an IR reflector sticker though, you can get the RC Car to go anywhere that you want it to go, directing it from feet away rather than inches. Not just that, but it appears that the Joy-Con also has thermal camera built into it as well, making the RC Car the spy surveillance drone that I always dreamed of owning as a kid. All-in-all the RC Car took about 30 minutes to build with my trusty helper Kyle (I was loaned a 10yr old from a friend since my own son wasn’t old enough for the event). I moved the visual instructions forward on the Switch and knocked out pieces and he bent and clipped together the cardboard with ease.

Moving on to the bigger build, we were able to tackle the Fishing Rod next. While the RC Car was simple in it’s design, the Fishing Rod is anything but. The ambitious Tree-house crew at Nintendo had found a way to mass produce a kit to create a functional cardboard Fishing Rod, complete with telescoping rod, reel, and a functioning fishing line. We were allowed about 50 minutes to complete the rod and Kyle and I were almost triumphant in completing it within the time limit (we were later told that completing it in that time was a challenge as the standard build time for the Fishing Rod is 60-90 minutes). While it is a complex build, the step by step visual instructions make it’s construction very easy. You can easily move forward and backward on the screen, as well as use the multi-touch function of the screen to zoom in & out and rotate the models to make sure that you’re getting the build done correctly. But what can you do with a Fishing Rod you ask? Well, you insert the Joy-Con into two separate areas and set the Switch screen into “The Ocean” base that you create and you go fishing. As you reel the rod forward and back you can see the hook move higher and lower into the water, going from the high light areas that you would normally snorkel in, all the way down to the “midnight zone” where angler fish and giant sharks lurk. Each fish in the ocean has is own quirks and ways that you have to work them up to the top of the water without snapping your line. The fishing aspect may not be a part of the kit that you will play for hours on end, but it was a very fun build and is a great display of what some of the tech can do.

While we only built the first 2, they did have all announced pieces available to play. House uses the camera in the right Joy-Con to see the different cardboard buttons, cranks, plugs you place in the sides and bottom of the house to interact with a tiny monster that lives there (using the Switch Screen to see everything transpiring). You can flood the house with water, add a fan to blow everything around, and create portals to do hilarious things with the monster and his belongings. You can also send the monster to a recreation of the Donkey Kong Country mine cart levels or put it in a hamster wheel to make little candies for it to eat. This was easily the favorite among many of the kids as it had the most options and the monster is very playful.

The Motorbike is exactly as it’s named, a motorbike racing game the uses the motion controls in the Joy-Con to judge how much throttle is applied and how tightly you will turn. I personally did not get a chance to play with this portion of the game, but I can attest that it certainly looks to be a very complex build.

The last part of the Variety Pack is the Piano, the very first contraption that you are introduced to in the reveal video. The Piano is extremely impressive to see and feel in action. The camera in the right Joy-Con is used to see which keys are lifted and how high they’re went, allowing you to play music. There is also a lever on side of the unit to adjust pitch. There are 3 additional knobs that you can add to the top of the piano (again using the camera to see it’s there) that will give you different options such as cat meows and old men singing. You can also turn the knobs to add and reduce reverb to the music that you’re playing. Side note, the cat meow is both the greatest and most annoying way to play music ever (especially with reverb added).

The last piece that we were able to use is the Robot, a build and game so extensive that it will be sold all by itself. You use a series of pullies connected to the back pack portion to move the robot, allowing you to walk, punch, fly, and transform. While the build is extremely impressive, the robot was definitely not my favorite game. While there are many things you can do, the actual movement was a little hard to control. The walking was a bit cumbersome and the “tank mode” you can transform into moved a bit too fast and couldn’t be slowed down. Flight was easily my form of movement of choice but you couldn’t perform any offensive moves while ascending. I however am not a child anymore and the kids LOVED the robot, so there’s that.

After our “play” time, we were then treated to a section of the Variety Pack that hasn’t been announced yet, a programming system. This console that you can enter into allows you to mix and match the different apparatus’ that you create from the pack to create new ways to play. This section also houses additional features such as a Guitar. You can use the motorcycle handlebars to control the RC Car, create new sounds in the piano, and much much more. We unfortunately were not allowed to play with the system, nor were we allowed to take photos or video, but the interface seemed rather intuitive and will definitely help younger kids get a leg up on the basics of coding.

All in all the Nintendo LABO system is extremely intriguing. There are so many possible items you can make that I’m excited to get a pack for my son when it comes out. As a parent we’re always looking for way to interact with our children and teach them, beyond just doing homework and reading to them; Nintendo LABO seems like the perfect answer to the question “What’re we going to do today?”.

Gaming is a personal expression of art, it’s a look into the dream world of their creators, it’s a conduit to hone the coordination of sight, sound, & touch, it’s a something that can make you think long and hard to solve a puzzle or mystery. Gaming is a conduit that many of us use to make friends and bridge gaps in people that we may be acquaintances with. Nintendo always seems to find a way to get more people to embrace video games, something that I am 100% behind. I look forward to future generations of gamers learning and playing with earnest.